I'm pleased to announce the release of AQTESOLV v4.5, the world's leading software for the analysis of pumping tests, slug tests and constant-head tests since 1989.

AQTESOLV/Pro v4.5 is the first commercially available software for aquifer test analysis to feature a new analytical solution by Tartakovsky and Neuman (2007). Unlike the familiar method by Neuman (1974) for pumping tests in unconfined aquifers, the Tartakovsky-Neuman solution incorporates effects of 3-D saturated/unsaturated flow to account for noninstantaneous drainage at the water table. I've optimized the numerical computations in AQTESOLV to maximize the speed and accuracy of this complicated solution.

Shown at right is a match of drawdown and derivative curves that I obtained with AQTESOLV's implementation of the Tartakovsky and Neuman solution for an observation well monitored during a pumping test on Cape Cod by the USGS (Moench et al. 2001). Note the response at intermediate time which shows gradual rather instantaneous drainage of water.

Also featured in AQTESOLV/Pro v4.5 is a version of the Dougherty and Babu (1984) finite-diameter well solution adapted for the analysis of step-drawdown tests. Unlike traditional methods for analyzing step tests, the Dougherty-Babu step-test solution considers the effect of wellbore storage on early-time drawdown data measured in the pumped well. It also accounts for partial penetration, wellbore skin and turbulent well loss. One of my customers has already applied this solution with excellent results!

AQTESOLV v4.5 comes with interface enhancements and a revised Help system to increase productivity. For more information or to order the software, please visit the AQTESOLV web site or contact me directly!
Posted by hydrosolve at 5:29 AM 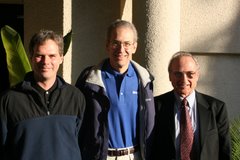